Six or seven million years ago Central and Western Victoria was covered by a broad basalt plain created by the lava flows of ancient volcanoes such as the Bacchus Marsh Volcano which had erupted some 45-50 million years prior. During the Pliocene age Victoria’s 200 or so conical scoria volcanoes gradually emerged across these basalt plains, beginning as a small vent and rapidly growing into steep sided mountains. Towards the end of this six million year period, about 470,000 years ago, Mt. Franklin was born in a fiery eruption, rapidly growing to stand next to Mt. Tarrengower and Mt. Alexander to tower over the surrounding rolling plains of Central Victoria. Although considered by volcanologists to be extinct, the last eruption of Mt. Franklin may have occurred as late as 5,000 years ago and there is evidence that the local aboriginals were witness to it as they enshrined the story in their oral histories and myths. It seems likely that this would have been the eruption that breached the conical wall of the volcano and thus opened the interior to easy access.

Mt. Franklin is classed as a prominent, breached conical scoria cone with a deep crater. The breach in the south-eastern side of the crater is most likely the result of late-stage lava flow breaking through the lower part of the cone and earlier flows were predominantly to the north and the west. Mt. Franklin is a major megacryst site with some of Victoria’s largest known examples of megacrysts of augite and an orthoclase. The coarse ejecta exposed around the summit also includes red and green olivine and megacrysts of high-temperature and orthoclase (to 7 cm long) and augite (over 9 cm long). Lumps of Ordovician sedimentary and granitic bedrock also occur in the ejecta and small basalt blocks contain cores of crazed quartz. On the western slope is a parasitic scoria mound referred to as ‘Lady Franklin’ but which remains officially un-named. The summit of Mt. Franklin is 635 m high, beginning from a base of 185 m above sea level, making the cone 450 m tall, and covered by extensive pine plantations whilst the interior of the crater is currently an arboretum containing many exotic species including an impressive stand of Californian Redwoods that were planted after a bushfire denuded the area.

The aboriginal name for Mt. Franklin is Lalgambook and the native Gunangara Gundidj clan of the Dja Dja Wurrung tribe have used Lalgambook for corroborees and other tribal ceremonies. Some of the original white settlers in the area were allowed to attend these corroborees and, early on at least, there seems to have been a willingness on the part of both parties to share the mountain. Attesting to their long occupation of the area, there have been many fine examples of aboriginal artifacts found in and around Mt. Franklin, many of which are now in the E S Parker room of the Daylesford Museum. When the white settlers did finally arrive intent on mining and farming the area the conflicts with the native population that ensued inspired the Victorian Government to send Edward Stone Parker to establish a protectorate for the indigenous people in 1840. Unfortunately this proved to be little more than a camp on the slopes of the mountain and by 1841, Parker reported that he could only count three members of the Gunangara Gundidj clan left in Franklinford. Disease and murder had accounted for the majority of their tribe. Tourists have visited Mt. Franklin since 1867 and in 1875 the local citizens rallied to ensure that Mt. Franklin was protected from the encroaching farmland. Today Mt. Franklin is administered by Parks Victoria who maintain a picnic area and camping ground there ensuring that the site remains a popular destination for day trippers to the Hepburn-Daylseford region of Central Victoria. 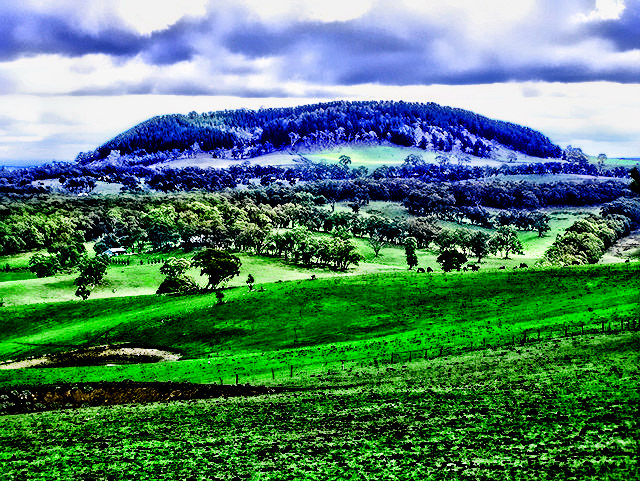 We would like to acknowedge  Alanna Moore and Geomantica magazine for many of the details in this essay- see http://www.geomantica.com/geom25.htm for more. Also, for the official Parks Victoria notes on Mt Franklin go to http://www.parkweb.vic.gov.au/1park_display.cfm?park=59 to download the PDF.

You can read about the first Mount Franklin Pagan Gathering in our Past Gatherings section – click here.